Some People Have NO Laundry Room Etiquette!

I went off to the laundry room of the apartment complex to get ONE load of laundry done (I must have lost my mind to try to do laundry on a Saturday morning) and got to meet one of the people who have NO laundry room etiquette at all.

There are SIX washers and six dryers in the room so common sense would tell you that a normal human being would not use all the machines at the same time especially if you live in a complex with lots of people who may also want to do laundry at ten in the morning. I have one load in the washer with the lid closed because I am waiting on the guy before me who has 10 minutes left on the three dryers he is using…while the person who is using the other three dryers is nowhere to be found.

There are FIVE machines with the lids up, showing they are empty and I am leaning on the one that has my clothes and the lid is closed. Sloppy selfish guy comes in dragging laundry bags and garbage bags full of clothes and proceeds to fill up the first three machines. He has to pass me to get to the other two so I move to let him by and he OPENS my machine.

I tell him that is mine and can he not see there are two other open ones? He shrugs and grunts and looks at the garbage bags full of clothes that he still has. He then proceeds to walk back to the car to get his remaining quarters and then walks back AGAIN to get the soap and ONCE MORE to get fabric softener. 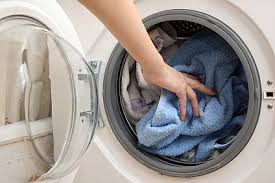 Seriously dude? Put ALL  the quarters in your pocket (he only had enough for one load in his pocket) if you are going to to multiple loads which you obviously intended on since you dragged 4 bags of clothes in.

In between all the trips he made out to the car it took him about 10 minutes because on his last trip in the other guy’s dryers started going off so he began to remove the clothes. Nice guy tells me I can have his dryers when he is done and I say ok.

Meanwhile, Sloppy guy has not even started one of the five washers he already has clothes in…..because he is huffing and puffing WAITING for me to remove my clothes from washer six.

Common sense and laundry etiquette say that you should have started the washers as you fill them so that by the time I was done emptying mine you could have it.

But NO…selfish Sloppy guy decides NO ONE will wash except him so he twiddles his thumbs (not even adding detergent or quarters to the washers) until I get all my clothes out…..THEN he proceeds to start his washing.

I really hate people who are being selfish like this….what about the OTHER people who need to do laundry too?

Tracking my finances in June: day 7