It Pays To Ask Twice Sometimes

I got locked out of one of my banking accounts recently. It is the bank on campus and it is one that I use only on the rare occasions that I have cash to deposit. If I end up having a large amount, well larger than $20, I will go to that bank when I am on campus and deposit the money there.

I will then make transfers to my ING/Capital One account which happens to be my main bank. In any case somehow the password got entered incorrectly and I was locked out of the online system. I was on campus and had some cash to deposit so I thought I would ask the reps if they could unlock the account.

The person who made my deposit said she could not unlock the account because this was not the main branch but rather a student version. This did not make sense to me and she said I would need to call customer service to regain my online access. While she was finishing my deposit I asked the other rep why they were unable to unlock the account since they were the same bank. 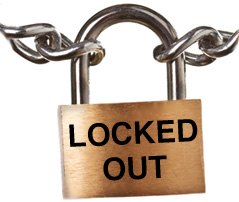 The other rep said he would take a look at my banking account and asked me to verify the login id used on the account. In just a few seconds he had the account unlocked and the first rep simply said she did not know they could do it.

So it worked out for me that I asked for a second opinion and also made me wonder if sometimes people say something cannot be done simply because they do not know how do it or they are just not in the mood to deal with it. This can also apply to your finances so if something does not sit right with you then you should go ahead and ask for a second opinion.

Used $173 On My Deductible For The Year

Money Question: Am I Saving Enough For Retirement?