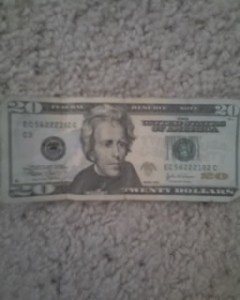 Since the last posting I have spent way too much money on dining out because I took a trip out of town. I paid $26.82 for breakfast at IHOP for a friend because it was his birthday and I was crashing on his (and his girlfriend’s) couch for the weekend.

We also ate at Buffalo Wild Wings after a show one night and that cost me $13.45 including the tip.

I had to spend $179.38 for two new tires because my tires were cracking. Huh?

Muffin (aka my ex) noticed that my tires were dry and cracking and told me in no uncertain terms to get them checked out and to NOT drive on the highway until I got four new tires.

This has totally wiped out the maintenance fund in ING and has taken a bit out of the emergency fund as well. I will be replenishing those two funds on a monthly basis and not getting the back two tires will let me have some breathing room.

I also spent $7.57 on a shirt at Ross since I really do need some new clothes for work. I do not like to shop for clothing and although I spent 25 minutes in the store I could not find anything that I liked.

All the flowers are dying

Still Looking For A Job