Pay Off Your Debt Faster:Debt Snowball 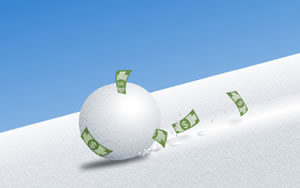 To have a debt snowball here are the steps you need to follow:

Those are really the basic steps you need to follow and you can choose which type of snowball method you prefer. There are two main snowball methods, namely the Lowest Balance method and the Highest Interest method. 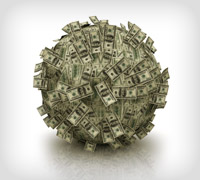 The Lowest Balance method allows you to pick the debt that has the smallest balance as your target. You pay the extra payments on that lowest balance target and you have the satisfaction of seeing it eliminated in a shorter amount of time.

So when you have decided to get serious about a plan to eliminate your debt you pick a snowball method and stick to it. The first thing is to list all what you owe in order of size. You can do it from smallest to largest or you can do it from lowest interest rate to highest interest rate. The important thing is to pick a ranking method and stick to it.

Then you need to decide whether you want the satisfaction of getting rid of one balance  quickly or paying less interest over time. This will determine which snowball method is best for you at the time. Once you decide the method then you will pick the amount that is going to be your target debt and all the other debts will be the additional ones to work on in the future.

Once you decide to go with either the lowest balance method or the highest interest method you need to set up your payment plan. The key here is to pay only the minimum on each debt except the target. You will then focus every dollar that have for paying down balances on the target. You will be paying more than the minimum on your target so you will be getting rid of it faster than you normally would.

Once you have gotten your target down to a zero balance you pick a new target. You can continue with the original method you chose for the first target or you can change to a different target. You will now be paying the amount you were paying on the FIRST target PLUS the minimum that you were paying on this current target every month. You continue to pay the minimum on everything else but you now have one less balance to deal with. The extra money from the first target has now snowballed into the second target and you will get rid of it even faster this time.

No one can tell you which method is right for you because different people want different things at varying stages of their life. When I began the serious work towards eliminating my debt I actually started with the Lowest Balance method first and then once that debt was paid off I switched over to the Highest Interest method.

5 things to do while housebound

Tracking My Finances In July: Day 1