This is what happened on Day two which is the actual day of the surgery. If you have not already read LASIK Eye Surgery – My Experiences – Day 1 you might want to read it to get an idea of what happened on the first day.

On Thursday December 27, I had to repeat some of the tests just to make sure that everything was right on track.

I had to repeat the vision test to ensure that my eyesight was not fluctuating, since this would disqualify me from getting the surgery done.

I got some more eye drops put in and then repeated some of the different tests with lasers although I do not remember the exact tests now.

Then, instead of getting the corneal thickness test again, I had my eyes marked with surgical ink. I got some more numbing drops put in and the doctor got these different colored pens that injected ink into my eyes.

I now had these purplish spots around the edges of my iris, to help guide where the incisions needed to be made. After waiting around in the inner waiting room for a little while it was time to meet the doctor.

I was given a mild sedative so that I would be relaxed during the surgery. After waiting a few minutes to give the sedative time to work I was ushered into the operating room, along with five other candidates.

The room was extremely cold and we were given blankets and then told to sit with our eyes closed. We were then called one by one to get the corneal flaps cut on our eyes. This involved getting some retractors put on the eyelids to keep the eyes open.

Next, a suction ring was placed on the eye to keep it steady. All the lights were turned off and a bright spotlight was directed at my eye. I saw Dr. Boothe‘s hand come down over my eye and then I saw the cornea being lifted. After that I could not see anything else.

A few seconds later the second eye was done and then my eyes were taped shut. Someone helped me off the operating bed and took me to a seat.

I waited a few minutes and then I was placed on another operating bed so the laser could do its work. The laser was very LOUD but it was not painful at all. In fact I could not feel anything at all and all I could see was a very fuzzy light off in the distance.

The actual procedure itself probably took about ten minutes in all. The long waiting time was the period in between each stage of the surgery. 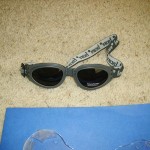 After having my eyes taped shut for a few more minutes I then got the tape off. I was given these goggles to wear any time I was outside or in a position that might pose a danger to my eyes.

I wore the goggles outside all the time and walked around WalMart with them. People stared and stared all the time.

Some people smiled and I think they thought I was some ghetto person trying to look hip or something.

I kept wanting to tell everyone that I had just had eye surgery so that they would not think I was a Fashion Don’t. 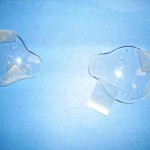 I was also given these eye shields to wear whenever sleeping. I was not allowed to wear the goggles for sleeping because the doctors said that people tended to rip the goggles off when sleeping. Now I have tape on the edges of the eye shields because I have already used them but you can see how they look without the tape.

I had to put in two separate sets of medicated eyedrops every two hours, waiting ten minutes in between each type. I also had to use artificial tears every 15 minutes while awake in order to keep the surface of the eye moist.

The eyes need to stay moist so that the healing process can take place and also to prevent irritation of the eyes. Even though the eyes needed to stay moist ordinary tap water was completely out of the question. In fact we were told that we could not wash our faces for SEVEN days following the surgery.

This seemed a bit gross to me but I understood the reasoning. The doctors did not want us to touch our faces or get water in the eyes because of the risk of infection.

The eyedrops ran out of my eyes and dried on my face so I used a little cotton pad to wipe around the edges so that my face did not look gross. I am glad that I am off for the rest of the week with all of these restrictions.

There was a clear, medicated contact lens that was placed as a bandage over the cornea and this had to be removed by the doctor the next day.

Come back to find out what happened the next day when I went to remove the medicated lens in LASIK Eye Surgery – My Experiences – Day 3.

Here are my past experiences with LASIK: 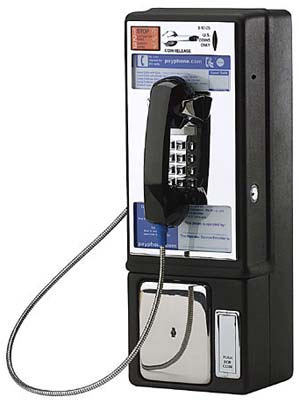 I Used A Payphone

Adjusting the time for comments